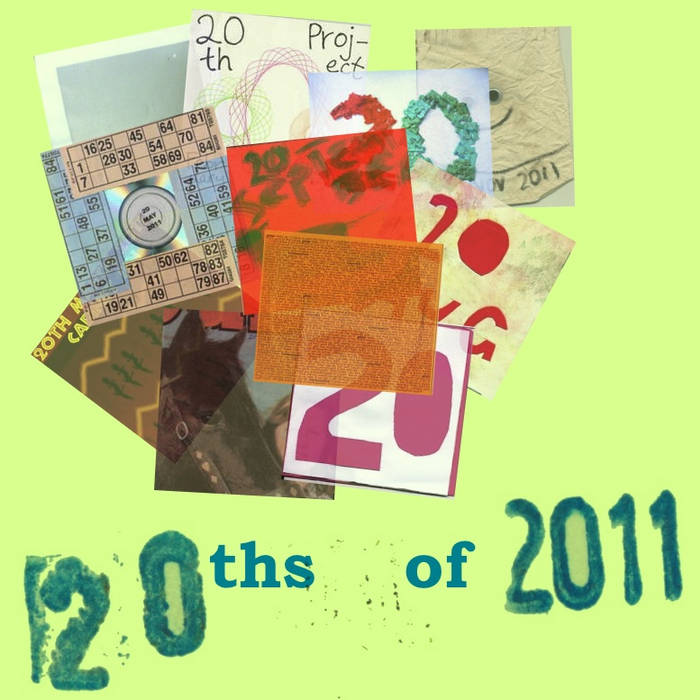 I seldom do instrumentals (this might be my 3rd?) and usually use amps to record the guitars but on this particular 20th I started recording late, and since the kids were asleep, in headphones, including for the mix.

Drums
Krister played on his Yamaha stage kit into the Zoom R16 recorder; kick: inside, Sennheiser E602; snare top: Shure SM58; OH's: 4' out & 5' up, spaced-pair Shure BG 2.1's; Room: 20' out& 5' up, MXL144 ribbon. (Other drum tracks were discarded.) I recorded Krister playing the raw drum tracks on 11-6-11in his low-ceilinged basement while experimenting with the Beta Greens, (I usually use Studio Projects C5's for OH's.) In that we were recording to test sounds, I ended up taking home and mixing the drums down and cutting and pasting sections for the arrangement on that 20th of the month, at about 3:00 AM. The kick was gated, everything limited, but there was no other processing.
I (Vlayman), re-mixed the drums and recorded the rest starting about 10:00PM, with the final mix done at 11:20 PM:

Bass
Alvarez-ART TPS. The early 90's bass (Korean-made, with EMG's) was DI'd thru the ART pre-amp on "valve", pass-filtered and limited.
RthmGtr: Telecaster-ZoomGM200- Focusrite Trakmaster
The '88 Tele went DI into Zoom's low-end analog emulator on "Blues Tweed", then into a Trakmaster with compressor on I had just bought, pass-filtered and limited.

LdGtr: Tele-ZoomGM200-Studio Projects VTB1
The '88 Tele went DI into the Zoom's low-end analog emulator on "Metal Panel", then into the VTB1 with the starved-tube fully engaged, pass-filtered and limited.

The drums were completed first, then I just did a bluesy bass line, with stops at the tom fills. The rhytm guitar follows the bass. Then I just wanked the lead, no punches or dubs at all, altho' I did have to align 2 bass notes and one rhythm guitar stab.

Bandcamp Daily  your guide to the world of Bandcamp